Strangers on a train

Hannah Thornton was on a train near Sheffield when she overheard a conversation between two strangers Maurice and Bill. She was so inspired by their connection that she send them a note to say thanks. This note then went viral, and has been seen by over 31 million people on social media. In this blog she talks about how important it is to make time to have those small moments of kindness and connection.

The story I’m about to share celebrates the wonderful power of human beings. It also shows that you can never truly know just how far a small act of kindness can go. I hope it inspires you!

On the 2nd February 2018, I boarded the 9.47am train at Sheffield station ready to make my way to a family funeral in Wigan. I sat down at the nearest available table seat, and the gentleman sitting opposite me (who we now know to be Maurice) gave me a welcoming smile and hello. I knew then that he was a friendly soul. I imagine we’d have got chatting if I hadn’t suddenly become pre-occupied with a yoghurt explosion in my bag (don’t ask…).

Once I’d settled into my seat, another gentleman (Bill) had also sat down at the table. As I wiped the remaining yoghurt off my coat (!), Maurice turned to Bill and asked him where he was travelling to. From that moment, the conversation between them never stopped.

I smiled again and again as they talked about their contrasting (but lovely) plans for the day, their passions, their careers, their families, and their heartening outlooks on life. They even shared photos of the things and people they love – completely immersed in one another’s company. The 50 minute journey from Sheffield to Manchester flew by as I quietly listened to every word from the other side of the table. I was so thankful to have been in their company on the train that morning that I wanted them to know the impact they’d had on me.

I passed a note to them as I left my seat, and I went on my way, suitably cheered up. 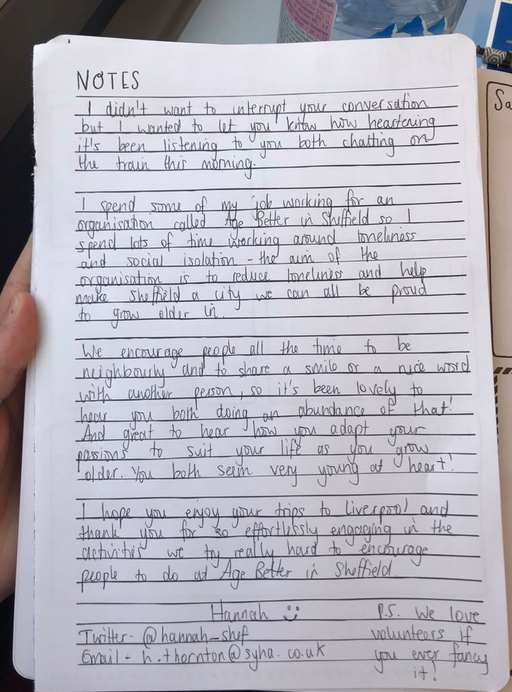 Hannah’s note, which she gave to Bill and Maurice

I didn’t expect anything to come of the note at all, so I was incredibly shocked when I got to work on the following Monday to find an email with the subject title “Girl on the Train”. I read the email with a pounding heart. I couldn’t believe Bill had taken the time to get in touch with me, and to share his life so honestly and openly. I replied to his email, and one week later I shared the story on my Twitter account in the hope that it would bring a smile to some people’s faces, as it had mine.

What I definitely hadn’t anticipated was that the story would go on to capture the attention of people across the world! In the days and weeks that followed, the tweet was liked over 40,000 times and was picked up by local, national, and international press. I spoke on BBC Radio Sheffield, BBC Radio Leeds and the story featured on news websites including the BBC, The Sun, and Belfast Times, to name just a few.

It was even translated into other languages, and people got in touch from India, America, France, Germany, New Zealand, all sharing their kind thoughts, and their plans to go and make a change in their communities.

Amongst the press attention, myself and Billy were reunited! And we also managed to track down Maurice a few weeks later. Amazingly, I now have two new special friends who I hear from regularly. In total, it’s been estimated that the story reached approximately 31 million people across the world. I still find this astonishing!

But above all, I am filled with hope at the potential of all those people working together to make a change. No one can single-handedly solve the loneliness that people experience across the country (and in other countries), but there are lots of things we can all do to make a difference for others – it could be as simple as sharing a smile, passing the time of day, checking on a neighbour, or taking time to notice people in situations that may sometimes pass you by. 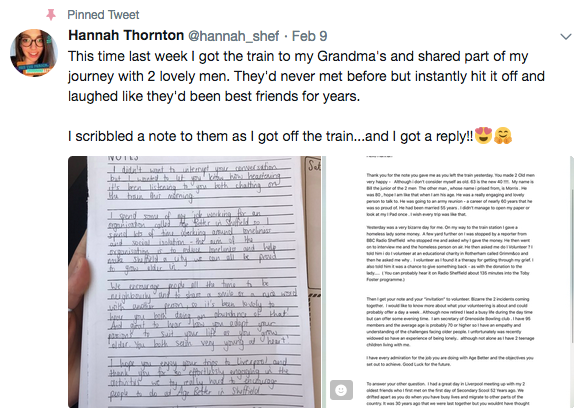 I am a firm believer in the power of the small things, because we can all do something little amongst our busy lives, and the great thing is that it can be something that is completely unique to you – love music? Share your favourite song! Have you got a favourite haunt in your city that’s no longer there? That will be someone else’s favourite haunt. Find a certain comedian or show funny? There will be someone feels the same. In the famous words of the late Jo Cox, “We have more in common than that which divides us.”


It feels like today has been a dream! Check out the video below to see the moment that Bill and I met in person for the first time since our train journey!

My heart is so full of joy – feels like I’ve found a new friend for life! Now we just need to #FindMorris /#FindMaurice pic.twitter.com/VQGih2QNYv

Together, those things add up, and for me, Bill and Maurice on the 9.47am train from Sheffield on Friday 2nd February were the epitome of that message.

Thank you for reading our story, I hope it’s made you smile, and I would love it if it has inspired even one more person to go into the world and do something kind for someone else to help them feel valued.

You never know the impact you could have on someone’s life, and even on the life of someone sitting close by – quietly observing (though for your sake, I hope they’re not always covered in dry yoghurt!).

Hannah works as a Communications and Toolkit Officer at South Yorkshire Housing Association/Age Better in Sheffield. If you’d like more inspiring stories and moments of kindness and connection, follow Hannah on Twitter.