The best kind of friendship – #NewYearNewUs 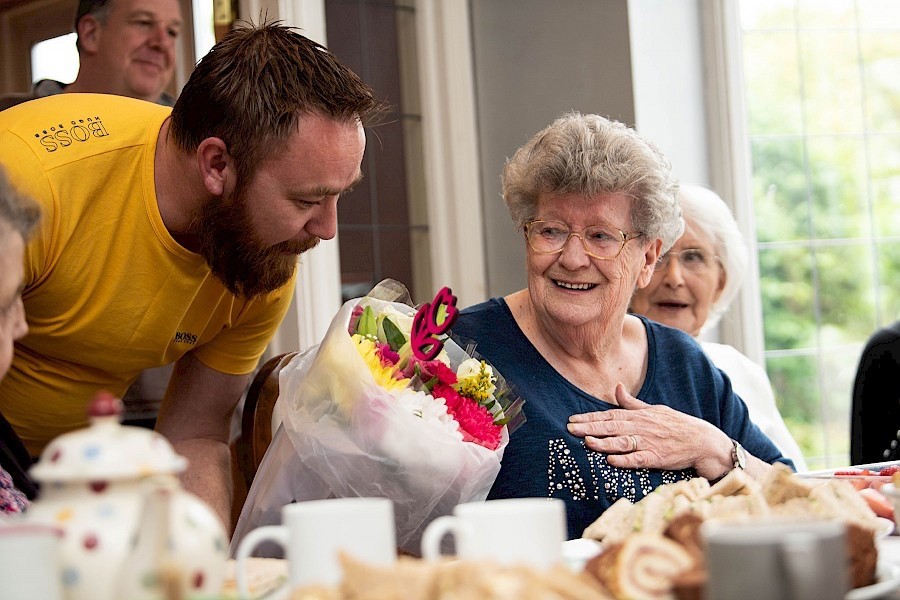 Re-engage, formerly Contact the Elderly, is committed to older people feeling heard, valued and engaged. As part of #NewYearNewUs, in this blog we hear from from Amarjeet, Taylor, and Chris about their experiences of volunteering and participating in Re-engage tea parties, and the powerful connections and friendships they have formed.

Prior to retirement, Amarjeet, 89, worked as a journalist before becoming a yoga teacher. “I loved meeting people, I met and taught so many interesting people, it was the best part of my job!”

These days, it’s difficult for Amarjeet to walk long distances but she manages to get out every day to sit in her local park, which can sometimes make her feel lonelier. “I like to go to the park for fresh air.” said Amarjeet. “But even though there are lots of people around, no one speaks to you. You just sit on a bench, alone.”

“Whether it’s a tea party or a friendly chat on the bus, we could all spend a little less time on our phones and more time speaking to each other.”

In an age characterised by social media, socialising and keeping in touch are usually activities which are organised via our phones. And for the many older people we work with – the generation least likely to use the internet – we know how difficult it can be to find company beyond the odd hello at the supermarket checkout.

But on a Sunday every month across the country, older people like Amarjeet and volunteers from all walks of life come together to enjoy a cup of tea, conversation and each other’s company – without a mobile phone insight.

While no two Re-engage tea parties are the same, it is the powerful connections and friendships formed between people that bind them all together.

Taylor lives in Bristol and has been volunteering with Re-engage for three years: “I’m a blogger, so I’m pretty addicted to my phone but once a month, my phone is left in a bag and I don’t give it a second thought! That’s purely down to the amazing ladies and gentlemen I get the pleasure of spending time with.

Our volunteers and guests are all worlds apart and if it wasn’t for the tea parties, our paths would probably never have crossed. It’s a crazy little world where millennials, war vets and every type of person you would think of bond and share life stories and it’s just magical and so important. We learn so much from the older generation but they also learn so much from us too, it’s the best kind of friendship.”

A tea party with a twist

It’s not the location of the tea party but about the common ground that people share with one another that really matters. Chris Hill runs walking cricket groups with a tea party twist for older men struggling with loneliness.

“The challenges in particular for men is how hidden loneliness can be and how they are often reluctant to admit or talk about it.” said Chris. “Sport has always been a great way for men to feel part of something and share that interest with others and as a result, friendships have formed and there’s a real sense of community.

The groups are becoming really popular – We run five walking cricket sessions and hope to roll out three more clubs in Leicestershire and Northamptonshire.” Find out more.

Whether it’s a tea party or a friendly chat on the bus, we could all spend a little less time on our phones and more time speaking to each other. You never know who you might meet.