Inspired by having to adapt her fiftieth birthday party due to Covid, our Executive Director, Kate Shurety, has been spending her free time since lockdown on a creative project: a quarantine quilt. This is her blog about the experience.

“I went into lockdown the weekend before it became official. I called off my fiftieth birthday party, as I knew too many people with compromised health, and moved the office home where, luckily, I had a spare room.

But when friends asked me what I wanted as a present, I was a bit stuck. The main thing I was missing was the possibility of their presence. The ‘party’ should have been a day of collective gardening in my back yard. Not easy to do on Zoom or WhatsApp! The idea was that at the end of the day, a group of people can step back and collectively enjoy a sense of achievement, knowing that: ‘We made that together.’

“Being connected is about participating – being active, giving and receiving: and making something better than you would on your own.”

So, a week later, I emailed the original group and asked them to work with me on a new project: a quilt. I asked everyone to send me a piece of fabric with a word stitched on that summed up what it meant to them to be connected to other people.

Since then it’s been passed on through friends of friends, colleagues of family members and across my immediate community. It’s not exactly ‘gone viral’, but almost every day I am receiving a physical object – something tactile that has been worked by the hand of another human being and expresses something uniquely personal and important to them.

I can’t quite describe how immensely moving that is.

Alongside the pile of fabric squares mounting on the side of my desk I also have a precious stack of notes where people (including some I have never met) explain why a word or phrase evokes the need for connection for them. 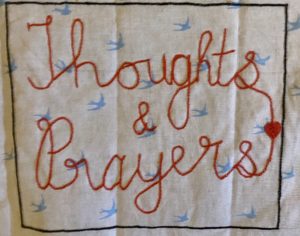 One of the most poignant was from a woman who lost her father as a child and would connect and remember him in her thought and prayers. It became a way of navigating her own bereavement. As she eloquently puts it: ‘I thought of him and remembered him in my prayers, whenever I felt like it. By now this has become my way of keeping connected with anyone I have not seen or do not see often.’ 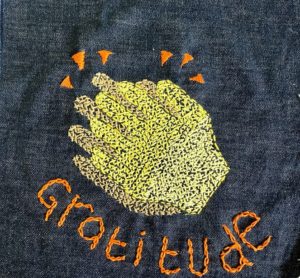 Another contributor revealed she had found the act of focusing on a positive word and stitching it so rewarding she was about to make another for her own home.

There are some themes that come up repeatedly through different words. Younger contributions such as ‘the force’ and ‘wifi’ are both witty and demonstrate the difference in how generations are experiencing the pandemic and lockdown.

“The idea was that at the end of the day, a group of people can step back and collectively enjoy a sense of achievement, knowing that: “We made that together.”

Mutual support, shared interest, mutual aid, community, laughter, participate, food and harmony all have reciprocity at their heart and work through sharing and active contribution.

Words such as smile, kindness, friendship and gratitude speak to an emotional need that is nourished through other people. 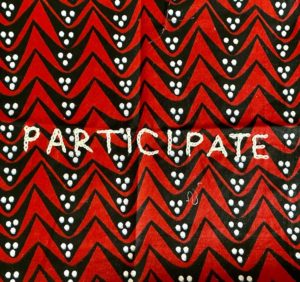 I feel fortunate so many people have shared their work with me. The project is much bigger than any birthday party I have ever had – and now I am thinking about how I can share this back with those who have given their thought, skill and care to participate.

I think that last word is part of the magic. Being connected is about participating – being active, giving and receiving: and making something better than you would on your own.”