Why don’t we talk anymore? 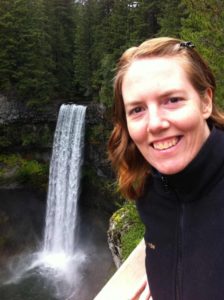 Dr. Gillian Sandstrom is a social psychologist at the University of Essex. Here she shares her research and personal stories about the benefits of talking to strangers.

The Be More Us campaign promotes the idea of chatting to strangers as a way to tackle loneliness, by building small moments of connection. You may be wondering: “How can a little chat make a difference?” My personal experience has convinced me that it can, and there’s scientific research to back it up.

People often ask me how I ended up studying loneliness. When I started my Master’s degree in Psychology, I suffered from imposter syndrome, wondering whether I was clever enough to be there. My research lab was in one building, and my supervisor’s office was in another. On the street corner between those two buildings there was a hot dog stand. Somehow I built a smile and wave relationship with the lady who worked at the hot dog stand. Every time I saw her and she smiled and waved back at me, I felt a jolt of well-being. It made me feel like I belonged on campus.

This personal experience made me think. Do other people also benefit from these small moments of connection? Are these relationships might be more valuable than we give them credit for? I decided to run a research study to find out. I stood on the pavement outside of Starbucks, and gave people a gift card in exchange for participating in my study. All they had to do was go into Starbucks, follow some instructions as they paid, and then complete a small survey when they left the store. I asked some people to be as efficient as possible when they paid: help the barista by having their money ready and avoid unnecessary conversation. I asked other people to take the opportunity to have a real social interaction: make eye contact, smile, and have a little chat with the barista. It was no surprise to me to find that the people who created a moment of connection reported being in a better mood and feeling more connected to others.

You might be wondering: what did the baristas think about all this? Unfortunately, I didn’t ask the baristas, but I did look at this question in another study. I teamed up with the Tate Modern art gallery and trained their volunteers on how to approach and talk to visitors. We tested whether volunteers could improve visitors’ experiences by chatting to them about an exhibit in the Turbine Hall. Those visitors who had chatted to a volunteer reported being in a better mood and feeling more connected to other people than those who hadn’t. The volunteers could see the difference they were making to the visitors. As one of the volunteers observed: “I totally changed my mind about whether people would enjoy engaging in a conversation with a stranger. Many people were keen to discuss the artwork and I now believe their experience is enhanced by doing so. I thought they would find it irritating to be talking to a complete stranger.”

And there’s more: a better mood, and feelings of connection are not the only benefits of talking to strangers. You might also learn something. In one of my first ‘talking to strangers’ experiences, I learned that people can ride ostriches! I’ll admit, this is not something that I needed to know, but it delighted me, and we can always use more moments of delight. I’ve also learned about different places and cultures. I learnt that one region of China has a large number of people with red hair. Slovenia is 70% forest. I’ve also received some great recommendations for books, music, restaurants, and walking trails.

My colleagues and I recently ran a research study. We asked participants (mostly university students on campus) to talk to at least one new person every day for five days. At the end of the week, 82% of participants reported that they had learned something from at least one of the people they had talked to. Some of these things were small, like salon recommendations. But others were more consequential, such as learning about opportunities on campus. One participant found their conversations especially meaningful: “I spoke to three new people today. I found that despite our differences (gender, race, major, etc.), they all offered me a piece of advice that was meaningful and helpful in making my own life choices. This contributed to feelings of determination and inspiration that I would not have felt had I not received such a warm reception from strangers.”

Not every conversation will be especially interesting or enjoyable, just as not every book or movie or Netflix episode is. But this is no reason to stop talking. Even a nondescript conversation reminds me that there is one more person that I can connect with. One more person who is not so different from me, and makes me feel a little more trust and a little less fear. I’ve talked to loads of strangers now, but I still struggle sometimes to carry on certain conversations. A conversation involves two people, and both have to try to make it successful. But sometimes magic occurs, and a conversation with a stranger can result in a deeper connection. Every friend starts as a stranger, right?

Our recent study lasted one week. 43% of participants said they had exchanged contact information with at least one of the people they had talked to during the study. When we asked them what had been the best thing that happened, many responded that they had made new friends. “I talked to classmates I had never talked to before, and I made actual friends that I will be able to meet again during my studies 🙂 Thank you very much for giving this opportunity to an exchange student!” and “Exchanged numbers with a fellow crazy cat lady. We’re meeting up next week for coffee.” Students on a university campus know that they are likely to (and able to) see people again. This means they may be more likely to turn these moments of connection into longer-lasting relationships. But this can happen in other contexts as well. I don’t usually exchange contact information with people I chat to, but I did meet someone at a concert once, and we later met up again to attend another concert.

I encourage you to expand your idea of acts of kindness to include having a little chat with someone who could use it. Creating even a small moment of connection can have lots of benefits for the person you talk to (and for you too!)

For more resources about how to talk to strangers, check out Gillian’s website.